This exhibition is part of the Danish-German project Perspektivregion, which connects the regions of southern Denmark and Schleswig-Holstein. It consists of a memory parliament, a future parliament and artistic interventions. The starting point is the Danish-German border, which historically cannot be separated from the formation of European nation states in the 19th century. In view of the current and future global challenges, we understand the Perspektivregion project as a regional laboratory for a discourse on the power, meaning and impact of borders. Our art projects question the significance of national borders in terms of identity and belonging. What role do historical narratives and social practice play and how are concepts like home and identity constructed? The division of the world into a global North and a global South and the associated migration movements, challenge us to rethink collective coexistence beyond traditional border spaces. The destruction of nature and our planet cannot be stopped at national borders, but can only be solved together. A new dimension of solidarity for the future is necessary. The aim of our art projects is to broaden the horizon of what can be thought.

In her works, Jeannette Ehlers refers to the colonial history of Denmark and Europe and the postcolonial implications and continuities in the globalised world. With performance, film and spatial installation, she examines the circumstances and backgrounds of a false globalisation that is directed against large parts of humanity. For her, immigration and minority communities around the world have their roots in the legacy of colonial history based on war, expulsion and slavery. In visually fascinating and captivating language, she stages emotionally moving works that deal with the decolonisation of thought, everyday racism and the asymmetries in the Danish, European and world social power structure. The monument I Am Queen Mary, which Ehlers erected in Copenhagen in 2018 in collaboration with the artist La Vaughn Belle (US Virgin Islands), received international attention. Her exhibitions and transnational collaborative projects such as Say It Loud! at Nikolaj Kunsthalle in 2014, Whip it Good: Spinning from History’s Filthy Mind at Autograph ABP in London in 2015, Take Root at MOCAD in Detroit in 2021, Every Monument Is a Citizen with La Vaughn Belle at Pública in Puerto Rico in 2022 and Archives in the Tongue: A Litany of Freedoms, Kunsthal Charlottenborg Copenhagen 2022 aim to make visible the ongoing colonial past as part of the dominant European culture. Between revolt and utopia, it develops a human and cultural archive of critique and ethics that expresses hope for healing our culture.

In his artistic work, Thomas Kilpper follows a historical-critical, associative research method to investigate the political institutionalisation of power and hierarchy, injustice and disadvantage. With his conceptual printing, he has penetrated the floors and walls of culturally and politically significant historical buildings like the US Army’s Camp King base in Ober- ursel or the tradition-rich Orbit House in Southwark, London. His work State of Control in the former Ministry of State Security of the GDR, Berlin, also caused a sensation when in 2009 he transformed the 800 square metre floor space of the canteen into a discursive linocut surface on the theme of freedom versus state power. His contribution to the 54th Venice Biennale 2011 Pavilion for Revolutionary Free Speech, a space-consuming installation at the Danish Pavilion, consisted of a walkable floor construction with thirty-three carved portraits of political representatives who are responsible for the global state of unjust participation in provision and progress, and also for the suppression of free speech, as the Danish Biennale Pavilion was themed Speech Matters. Since 2008, Kilpper has been committed to a humane and future-oriented migration policy in Europe with the art project A Lighthouse for Lampedusa in museums as well as urban installations.
Both Jeannette Ehlers and Thomas Kilpper see their art as an active contribution to the negotiation of existing conflicts. Perspektivregion, a project that reflects on the future design of life in the Danish-German border region, cannot ignore these conflicts. On the contrary. A peaceful future is unthinkable without renouncing privileges and the willingness to grow together into a responsible world community.

The exhibitions in Kiel and Odense run parallel, but show different artistic works and focuses.

Admission to both exhibitions is free of charge.

An exhibition of the Heinrich Böll Foundation S-H in cooperation with KUNSTVEREIN HAUS 8/ Atelierhaus im Anscharpark Kiel,
KUNSTAKADEMIE FÜNEN, M100 Odense and Løgumkloster Højskole in the framework of Perspektivregion www.perspektivregion.eu

We would like to thank Kunsthal Charlottenborg, Copenhagen for their support in preparing the installations by Jeannette Ehlers. 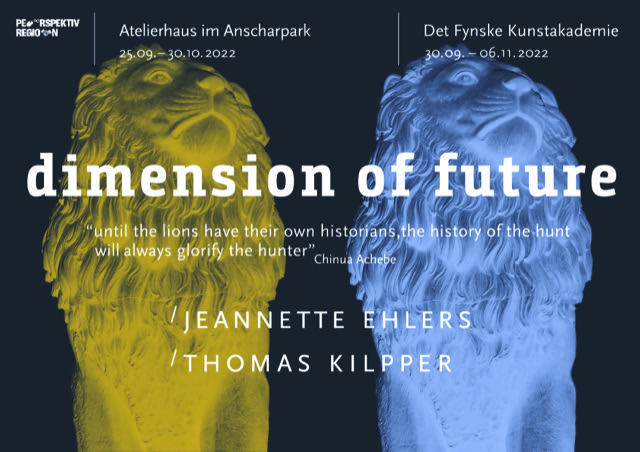